A recent survey has revealed that more than one out of three Australians still do not have any plans to switch to the National Broadband Network (NBN) or actually don’t  know what it is, seemingly not aware that their existing telephone as well as internet connections will not work once the new network arrives.

The NBN has now started running advertisements in television in order to remind Australians to switch to the new broadband network.

When Australians were asked that how fast they are planning to switch to the new broadband network once it arrives, almost 17% of 2,004 people said they have no plans to make the switch at all. Another 18% did not know what they would be doing or did not understand still what exactly the NBN was about.

Even among those that have made a plan to switch, almost 2% said they will be switching between 18 & 24 months after it arrived in their area. These people would be left in the dark as within 18 months of NBN availability, telcos are obliged to deactivate existing copper lines. 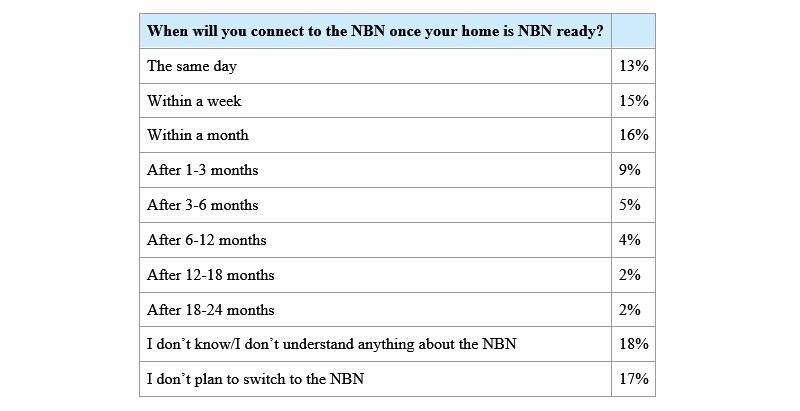 According to Finder.com.au, the total of 37% that would be left in the dark is equivalent to 6.6 million Australians. Finder tech spokesperson Alex Kidman was surprised to learn that still there are so many people who think that the NBN is optional.

“By 2020, every household in Australia will have to switch to the NBN — there’s simply no way around it,” he said.

The new broadband network, as the new universal communications infrastructure network, will completely replace the existing copper network that landline phones as well as many home broadband connections rely on.

In January, the organisation said that about 5.4 million premises which is equivalent to just under 50 per cent coverage would be having the NBN available by the middle of this year. It is aiming for 9 million by June 2018. The Australian government has imposed an ultimate deadline of end of 2020 for all 11.9 million premises.

“What’s interesting is that there doesn’t seem to be much of a middle ground among Australians. There are those who absolutely cannot wait for it to arrive, and then close to two fifths haven’t got a clue,” said Alex Kidman.